While the first two models refer to internal analyses, the third is the only one that takes into account variables from outside the company in setting the price.

Competitor-based pricing is a very intuitive approach, based on observing the pricing decisions made by competitors and choosing whether to go down, up or stay at a similar price to competitors.

The first step in this price-setting process is to identify the external environment and the players to watch.

The concept of competition can be declined mainly in three levels:

Therefore, once the companies that make up the competitive set have been identified, there follows a phase of analysis and identification of the prices practised by these subjects. What often happens can be encapsulated in three main scenarios. The first is the B2B market, for example, wherein most cases private negotiations are conducted, so knowing the actual price charged is not so straightforward; a second macro-scenario is the diametrically opposite one where, in a perspective of price dynamism, price scraping software is needed to know the price of a good or service that is variable by nature; finally, a third scenario is the one that represents a middle ground between the two previous ones and that may or may not involve the use of software to find out information on the prices charged by competitors. 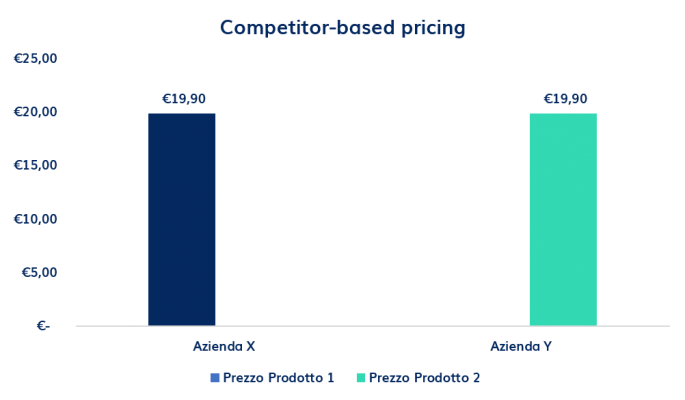 Why take this approach?

Assuming that the prices of the competitive set are known, the first advantage of this approach is the simplicity of the calculation. When using this technique, in practice, a price is applied that is very similar to that of most market players and there is, therefore, no complexity in arriving at it. In cases such as these, given the low weight of price on the consumer’s choice between companies, it is advisable to allocate one’s investments in advertising and marketing to convince the consumer to buy based on the identifying features of the offer.

The second advantage of this approach is that, if you charge a price in line with the average market value, you are also choosing not to take risks, taking into account that the consumer is already predisposed to pay a similar amount for that good or service.

Besides, this tends to achieve market equilibrium. In sectors where it is possible to identify a large number of sellers and buyers, if they all adopt this pricing technique, the average market price will be very close to the equilibrium price between supply and demand.

The limitations of a competitor-based strategy

Despite the simplicity and low risk associated with this pricing technique, several limitations can be identified.  The first difficulty with this methodology lies in the correct definition of the competitive set, as in some areas it may not be so straightforward to identify competitors or to find information about their prices.

Moreover, the choice of defining the price based only on competitors’ decisions does not take into account the company’s internal cost structure, which may be different from that of other players. Also, it does not take into account the customer’s perception of value, i.e. whether the price coincides with what the customer is willing to pay for that good or service. So, inevitably, if one chooses to follow only this approach, other aspects and indicators that are crucial for the survival of the company in the medium to long term will be neglected.

A third limitation lies in the fact that this technique implies little flexibility in responding to changes in demand or its evolution, leading companies to remain exclusively anchored to the choices of other companies and reducing the opportunities to seize possible elements for differentiation.

Finally, this approach implies the need to be able to collect and analyse large amounts of data on competitors’ prices, which may change every minute. Therefore, it is necessary to have a technological infrastructure to be able to constantly monitor and analyse prices.

In any case, this technique appears to be applied in some sectors, although it may not necessarily be the most profitable choice there. This method is commonly used in the hospitality industry, where the price per room in a hotel is often set by reference to the price of similar hotels within a certain kilometre radius. In this sector, this is especially the case in light of the role of online comparators, where price often becomes a determining variable for the consumer. In this way, however, one forgets to take into account the cost structure of one’s own business, one has no awareness of what consumers would be willing to pay for that room, and one does not necessarily have the correct competitors.

In general, it is important to remember that competitive pricing is only one of the many elements that need to be considered when thinking about pricing, as it allows you to monitor market trends, but it is not a method that, on its own, can guarantee profit maximisation and optimisation of business resources.